Get your apps here

Instructions on use here... 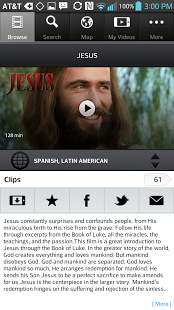 We are very excited about the new mobile apps for the Jesus film movies!

Jesus Film Media is the digital expression of The JESUS Film Project®, an extension of the overall vision to reach everyone, everywhere by equipping people to use our tools and resources in new ways! Finding just the right film resource or tool has never been easier. They are excited to share the entire JESUS Film Project® library with you on your smart phone.

Through the robust search feature users have the ability to find their resources by country, language name, theme, and title of the film. You will have access to films in over 1,100 languages!

Featuring the films JESUS, Magdalena, The Story of Jesus for Children in full length and segments; the series Following Jesus and Walking with Jesus and catalog of short films like My Last Day.

Read what Paul and Kathy Eschleman of The JESUS Film Project® have to say about the new mobile apps by clicking here.

Did you know that the Jesus Film offers 66,000 video clips? There have been 6 billion views of the Jesus Film and it is translated into 1,100 languages, leading to 200 million decisions to accept Jesus!

In 1979 Campus Crusade for Christ's leadership wanted to make a film about the life of Jesus resulting in a two-hour docudrama based on the Gospel of Luke. Following its initial release, the "JESUS" film has been seen in every country of the world. The JESUS Film Project and thousands of Christian agencies, churches and individuals have used this powerful film. Many mission experts have acclaimed "JESUS" as one of the greatest evangelistic success stories of all time, however, the ultimate success of this project won't be measured by how many people have already seen it, but by how many will follow Him after seeing this film.

Since 1979 their library has grown to include: two new feature films "The Story of Jesus for Children," a one-hour film using original footage from "JESUS" in which children recount Jesus' life and "Magdalena," a film specifically designed to help people understand Jesus' love, affirmation, and compassion for women; several geographically specific discipleship tools to help with initial follow-up in culturally authentic ways; and a Japanese animé film "My Last Day." The goal continues to be helping every nation, tribe, people and tongue see and hear the story of Jesus in a language they can understand. So whether a person speaks Swahili, French, or a language whose name is extremely difficult to pronounce, he or she will encounter the life and message of Jesus in the language "of their heart."

The Jesus Film Media website and app provide free, easy, fast access to all JESUS Film Project resources so anyone, anywhere in the world can use them.

Tom and the Bus Driver
Tom was riding the shuttle bus at the hotel at a conference and asked the driver where he was from. He told Tom he was from Kenya and Tom asked him what language he spoke - he said LUO.
Read more here...

Short Films in Taiwan
Watch this video to see how short films are being used to share Jesus with students in Taiwan.
Read more here...

Changing A Family
Cheeia, a Hmong-American student in Wisconsin, shares Jesus with her entire family in their heart language using the JESUS Film online. Watch her story here or...
Read more here...

Take Out
While on a business trip, I stopped into a Chinese restaurant for some "takeout." After asking, a woman helping me confirmed she was from China and spoke Mandarin.
Read more here...

Sharing with all women that Jesus is with you always, no matter how painful or diverse the circumstances.
Statement of Faith | Privacy Policy | Provided by Pritchard Websites | Need help? Contact Info@ccwomen2women.com